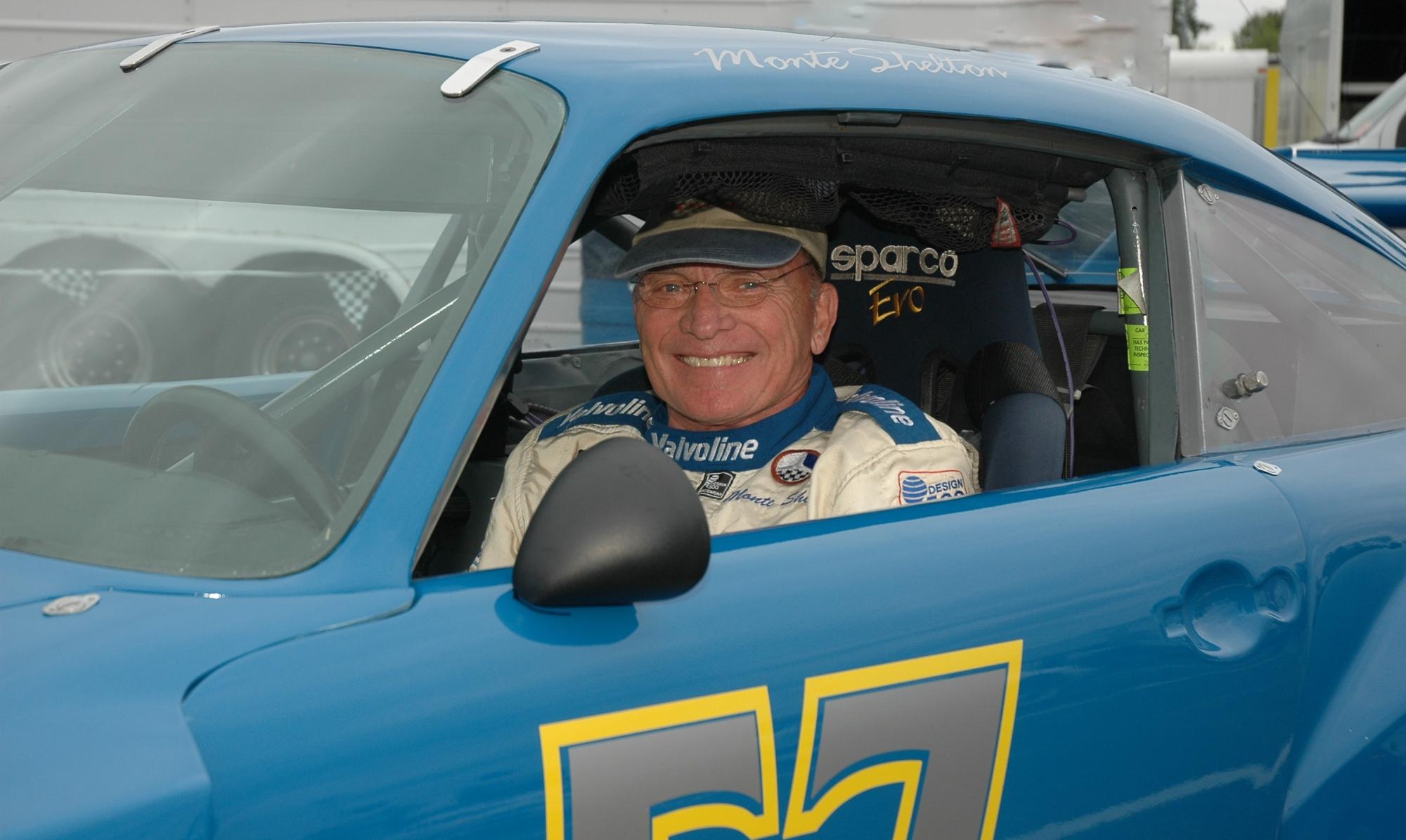 On June 16, 2019 Portland lost one of its' legends when Monte Robert Shelton passed away. A winning race car driver inducted into the Oregon Sports Hall of Fame and a car dealer whose business stood on the same corner of West Burnside for over 40 years, Monte will be most remembered for having a heart as big as the life he led.

Monte loved to race in the rain. A wet track, where he was driving on instinct and adrenaline – that was where he excelled. Monte made rain his great equalizer. When it rained, he made slow cars faster, he got gutsy and aggressive. He drove by feel, relishing the unpredictability of tires on wet pavement.

He was like that in life, too. In the sunshine of life, he was charismatic, generous, kind. But bring on a rainstorm, a hard time, a struggle – that's when you got to see the really good stuff. Bad weather, hard times; that was when you saw what Monte was really made of.

Descended from Ralph Shelton, who arrived in Yorktown, Va., in 1693, Monte was born Sept. 27, 1933 to Margaret and Melvin Shelton in Maryville, Mo. Monte crossed the Rocky Mountains in a Model A Ford with his siblings, Cliff and Beverly, when his father sought work in the Portland shipyards. After a three week trip, Monte arrived in Oregon in 1943 with his dog, Wolf, in the backseat; the Model A hauled a mattress on the roof and a rickety trailer to the family's new home in Vanport.

Three years later Monte met the woman who would become his wife, Susanne Halbrook. He remembered having cardboard in his shoes to cover up the holes when he met her; Sue's mother snuck him into the kitchen when Sue had dates to deter any would-be suitors. He was at his best when there was a little competition and Sue fell for him, hard. Their marriage lasted 65 years.

In 1948, Monte's family moved to a modest house on Blue Lake and Monte worked as a lifeguard alongside his lifelong friend, David Alexander. Even then, cars were in his blood. He spent hours in a neighbor's field with his first car, a 1931 Ford Roadster, teaching himself to slide through corners and make that car dance. The Roadster soon gave way to other cars bought and sold, even as Monte pursued practical dreams of becoming a teacher.
Monte married Sue March 7, 1953. Two weeks after the marriage, Monte was called up and served in the Coast Guard on the USS Bluebell. Afterward he used the G.I. Bill to attend Portland State University, earning a degree in education. He was going to be an elementary school teacher, but with a new baby and wife to support, Monte began to look for part time work to make ends meet.

He found a job washing cars at a used car lot and he never looked back.

In 1959, Monte opened his first car lot with a friend, Bob & Monte's Used Cars. In 1963 he went solo with Monte's Motors on N.E. 7th and Broadway. He moved the business again in 1968 to N.E. Sandy before finally buying British Motor Cars in 1974. He opened the Monte Shelton Motor Company on West Burnside when he was 41 years old. He ran the business with his son, Neil until 2016. Even after closing the new car business, Monte went back to his roots, opening Monte's Motors with Neil in 2016 where he bought and sold collector cars until the last days of his life. Even when he knew his time was short, he could be heard on the phone wheeling and dealing until the very end.

In 1960, Monte realized the dream he'd been working on since that dirt field by Blue Lake and ran his first race in a Austin-Healey 100M. He went on to race for 60 consecutive years until just two months before his death; his last race was in April 2019 at Portland International Raceway at the age of 85.

During his racing career, Monte competed in the Daytona 24 Hour race 11 times, placing third in 1979. He won seven Rose Cups; Monte was 72 during his last Rose Cup race during which he set a lap record in his Porsche 962 and won the Cup. His favorite Rose Cup win was in 1974 in a McLaren M8F; his good friend, Bob Ames drove the pace car, a white Rolls Royce off Monte's showroom floor. He always prayed for rain.

Monte raced the Maryhill Loops Hill Climb steadily from 1960 to 2016. In 1960 at Maryhill, he survived a harrowing crash where he slid off a cliff and managed to stay right-side up; he banged out the dents and raced that same car, an Austin Healey, the following year. He walked away from a devastating crash at the 1982 Rose Cup in a Porsche RSR when he blew out a tire and went end over end; after a trip to the emergency room, he went out for Mexican food and went on to race the car again. In the 1972 Rose Cup, Monte slid off the track in a Lola T162 when the suspension broke; he took out 200 feet of cyclone fencing and ended up in the back of the pack. He fought his way back to the front and went on to win the Cup again.

Monte raced cars because he loved them, and competed even when it wasn't about winning. He took his beloved 1903 Rambler to the United Kingdom 4 times to complete the London to Brighton Run and was there for the 100th anniversary in 1996. In 2013 and 2015 Monte finished the Run next to his constant sidekick and friend, Dorothy Kemp. In 1989 Monte and his friend Dale LaFollet established the Monte Shelton Northwest Classic Rally. In that inaugural year, alongside his navigator Jonathan Nicholas, Monte's 1960 Porsche Roadster broke down and the pair finished the rally in a Subaru. He laughed about that rally until the end of his life.

Monte was inducted into the Oregon Sports Hall of Fame for accomplishments in motorsports, and was one of the first class of those recognized at the World of Speed Motorsports Museum. Monte credited Dick Elverud for his success in racing. The two worked together starting in 1966 on a Porsche 906; Monte said Dick was a genius at making a fast car faster and the relationship Monte had with Dick was one of the most important to him in his racing career.

Monte's best friends came from a variety of clubs and organizations to which he belonged throughout his lifetime. Monte joined the Sports Car Club of America in 1960 and became a life member. He belonged to the Touring Club of Oregon, where he said he met some of the best people he ever knew. He belonged to the Porsche Club of America; the Road Racing Drivers Club; the Steering Wheel Club of London; the Historical Auto Club of Oregon; the Classic Car Club and the Alpha Romeo Owners of Oregon. It was through classic cars that Monte met one of his closest friends, Dale Matthews.

Monte belonged to the Arlington Club and the Multnomah Athletic Club. Monte was a member of the MAC for more than 20 years and set multiple records for the decathlon in his age categories. A lifelong runner, he was devoted to exercise and said before he died that he would miss his friends from the MAC club and the camaraderie he felt there.

Monte was a loyal and true friend whose friendship you felt most during your hardest times. He was a devoted and steadfast father to four children, Jamie Shelton Martell, Montgomery Neil Shelton, Anthony Alan Shelton and Darla Sue Krieske. He was an active part of his grandchildren and great-grandchildren's lives. His wife, Susanne, was his closest confidant and friend. He remained committed to her even through illness and struggle at the end of his life.

Monte lived for 50 years on N.E. Alameda Street where he is remembered for the many kindness he did for those around him. Monte started playing Santa Claus to neighbors and friends in 1957, always driving a beautiful car, though his fondest memory was of a 1923 Moon Touring 6-40. He kept a list of all the children he visited and the gifts he gave them for 59 years – just like the real Santa.

He vacationed on Maui with family and friends for 45 consecutive years and loved to travel to London. He was an avid pilot who flew a Cessna 182 and a Citabria. He loved to fish on the Deschutes and the Sandy rivers with his friend, Jack Glass, and loved fly fishing in Montana.

For 85 years Monte Shelton lived each day as if it were his best. Though his family and friends feel the loss of him like the sun slipping behind clouds, they will look up at the clouds and smile. Because maybe, just maybe – it'll rain.